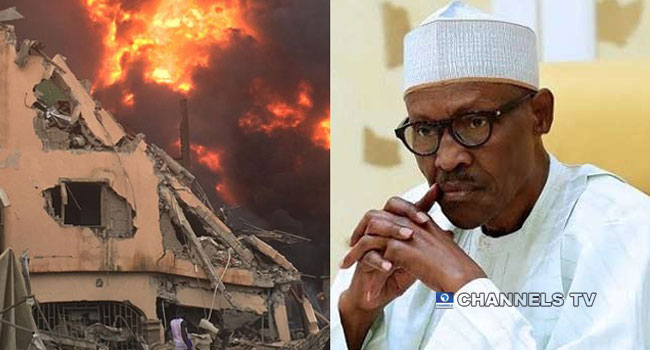 President Muhammadu Buhari has expressed shock and sympathised with victims of the Abule-Ado explosion in Amuwo Odofin Local Government Area of Lagos State, on Sunday.

In a short statement, President Buhari also expressed shock at the tragedy which many has described as a black Sunday.

I have received with sadness the news of this unfortunate incident which caused the loss of lives and property.

A misfortune of whatever scale anywhere is a tragedy to the country, and while the NNPC makes efforts to determine the cause of the incident, I send my deepest and profound sympathies to the victims, their families, government and people of Lagos State.

The blast, according to the Nigerian National Petroleum Corporation (NNPC), was caused by a human error.

The corporation, in a statement, added that the blast occurred after a truck hit some gas cylinders stacked in a gas processing plant located near the corporation’s System 2B pipeline right of way.

Channels Television reported that Spokesman of the National Emergency Management Agency (NEMA), Ibrahim Farinloye, confirmed that at least 15 bodies have been recovered and efforts are ongoing to rescue victims trapped under caved-in structures.