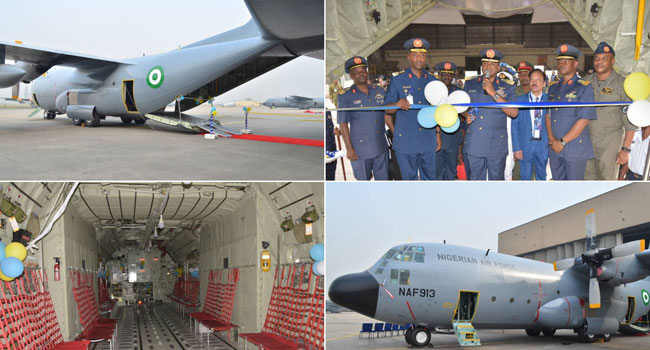 In its continued efforts to boost its airlift and combat support capability for Armed Forces’ operations across the country, the Nigerian Air Force (NAF) on the 29th of January 2020, ‘accepted’ back into service another C-130H aircraft, NAF 913, after a successful Periodic Depot Maintenance (PDM) within the country at the 631 Aircraft Maintenance Depot (631 ACMD), Ikeja, Lagos.

According to its spokesman, Air Commodore Ibikunle Daramola, this brings to 2 the number of C-130H aircraft successfully reactivated in-country within the space of one year after NAF 917 was commissioned on 24 June 2019 upon completion of in-country PDM.

Air Commodore Daramola in a statement noted that NAF 917 has since been involved in so many missions both within and outside the country, including the delivery of relief materials to flood victims in Mozambique and Zimbabwe as well as the movement of logistics for ongoing operations nationwide.

Also inducted today were 3 additional Toyota Land Cruiser “Buffalo” vehicles for Base Defence as part of continuing determination to ensure the protection of the NAF critical assets and infrastructure which would enable it to project Air Power effectively. The additional Base Defence vehicles would also provide increased mobility to NAF patrol and rapid response teams in the conduct of their essential duties.

While presiding over the acceptance formalities for the newly reactivated aircraft, the Chief of the Air Staff (CAS), Air Marshal Sadique Abubakar, who expressed his delight over the successful completion of the PDM, noted that the added heavy airlift platform would improve the operational efficiency of the NAF.

According to him, it would give the required impetus for a prompt deployment of troops and the provision of logistical support required for operational effectiveness in all theatres of operation.

“This accomplishment is a clear manifestation that our efforts at enhancing self-reliance are gradually producing the desired outcome”, he said.

The CAS noted that some of the benefits of the in-country PDM include tremendous savings of foreign exchange for the nation as well as significant improvements in the NAF human resource capacity and competence, thereby repositioning the NAF for better service delivery.

He expressed optimism that in the near future, the 631 ACMD would have developed capacity to transition into an authorized Regional Maintenance Repair Organization (MRO) for the C-130 aircraft type that would not only conduct PDM and other major maintenance activities on NAF C-130s but also for aircraft of other air forces in the Region.

Speaking further, Air Marshal Abubakar stated that the modest accomplishments so far achieved by the Service had greatly enhanced the serviceability of the NAF aircraft fleets and boosted its capability to project Air Power within and beyond the shores of the country.

Apart from the commissioned C-130H, the CAS said, the NAF is equally undertaking the local reactivation of 3 Alpha Jets and one Mi-35P helicopter.

He said the local capacity enhancement efforts are in line with the Federal Government’s policies and aspirations that encourage Ministries, Departments and Agencies to look inwards and evolve innovative solutions to the myriad of challenges the nation is confronted with.

In line with this, he said, the NAF would continue to pursue its capacity building initiatives through the conduct of local PDM of all aircraft types. He stressed that this would undoubtedly enable the Service to fulfil its primary responsibilities as provided in the constitution of the Federal Republic of Nigeria and to meet a broad range of national security imperatives.

While concluding his remarks, the CAS appreciated Messrs Shaheen Foundation of Pakistan for their contribution towards the timely completion of the maintenance activities on the aircraft, while also congratulating all the Pakistan Air Force (PAF) and NAF engineers and technicians who participated in the well-executed project.

He urged the NAF engineers and technicians who participated in the project to make the best use of the knowledge acquired during the PDM by effectively applying the same in the conduct of future maintenance on the C-130H fleet.

While commending the Commander of 631 ACMD and his team for a job well done, the CAS noted that the great achievements being recorded by the NAF in various theatres of operation within the country could not have been possible without the continued and tireless support of the President, Commander-in-Chief of the Armed Forces of the Federal Republic of Nigeria, President Muhammadu Buhari.

He also thanked the National Assembly, especially the Chairmen and Members of the Senate and House Committees on the Air Force for their support in ensuring appropriation of funds for the execution of the project. While further expressing his gratitude to the Federal Government for its support, the CAS said: “we will continue to sustain our efforts towards enhancing the security of our nation which is critical to nation-building”.

In his welcome address, the Air Officer Commanding (AOC) Logistics Command (LC), Air Vice Marshal (AVM) Lawal Alao, stated that the contract for the in-country PDM of NAF 913 was awarded to Messrs Shaheen Foundation in April 2019 and was also aimed at improving in-depth maintenance capacity of NAF engineers and technicians at 631 ACMD.

The AOC, while expressing his profound gratitude to the CAS for giving the Command the support and encouragement needed to push the NAF to greater heights, noted that the commissioning and acceptance ceremony of the C-130H aircraft marked the end of the in-country PDM, which is a calendar inspection conducted at 4-year intervals or after every 4,000 flying hours.

Earlier, while giving highlights of the PDM project, the Commander 631 ACMD, AVM Moses Onilede, stated that, apart from the excellent, cost-effective and timely execution of the job, the arrangement with Shaheen Foundation and PAF (SF-PAF) included the conduct of structured in-class and On-the-Job Training (OJT) to build the capacity of 19 NAF technicians, whilst refreshing their knowledge on Airframe, Avionics/Electrical and Power Plant.

He added that 3 NAF personnel were also trained in de-painting, chemical mixtures and painting. Furthermore, he disclosed that there were other value additions which included the provision of some specialized ground support equipment fabricated by the SF-PAF Team during the PDM as well as the reactivation of unserviceable Hangar infrastructure, some of which had not been in use since the 1970s.

The highlight of the colourful ceremony was the commissioning and inspection of NAF 913. The event also featured the award of certificates to the NAF technicians trained during the PDM as well as a brief hand over/take over ceremony, with the signing of the Aircraft Documentation for NAF 913 by the Shaheen Foundation representative and Chief of Aircraft Engineering Headquarters (HQ) NAF, AVM Musibau Olatunji, before handover of the Document to the CAS. 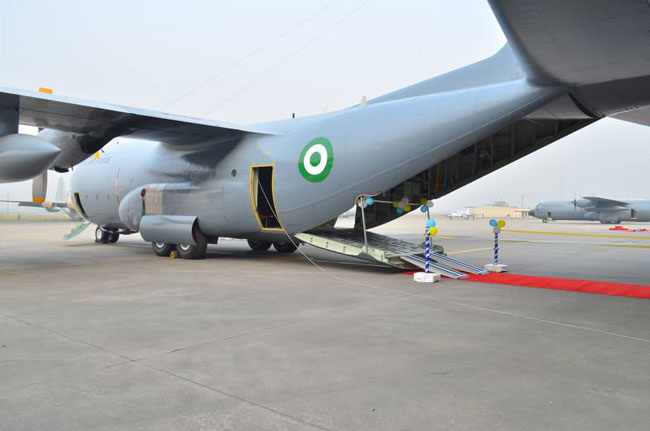 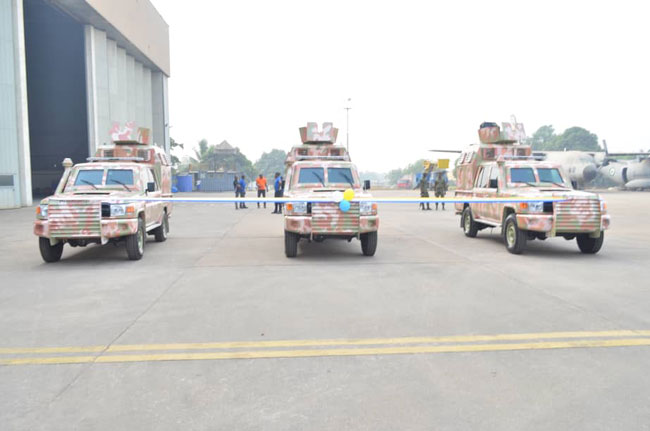 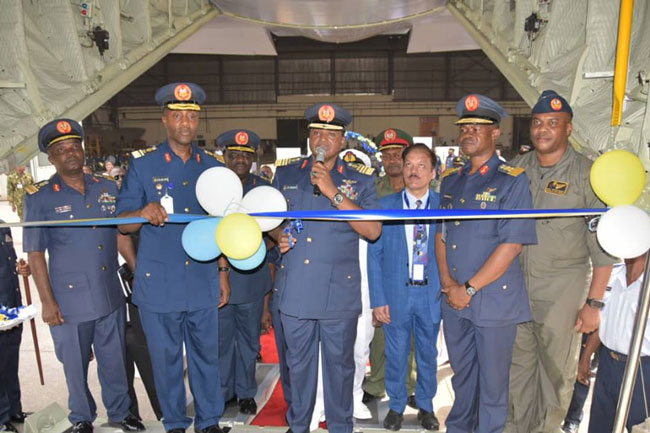 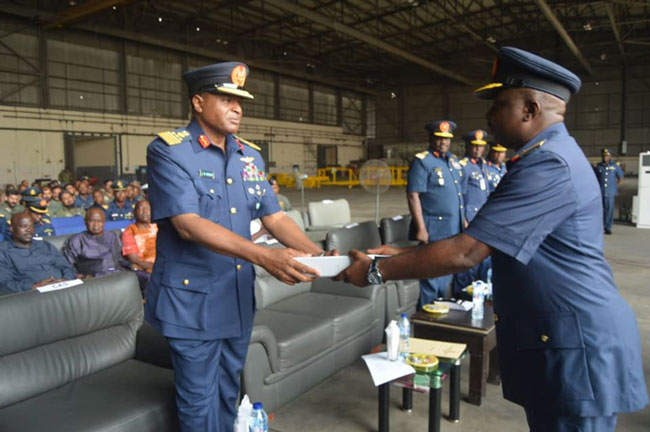 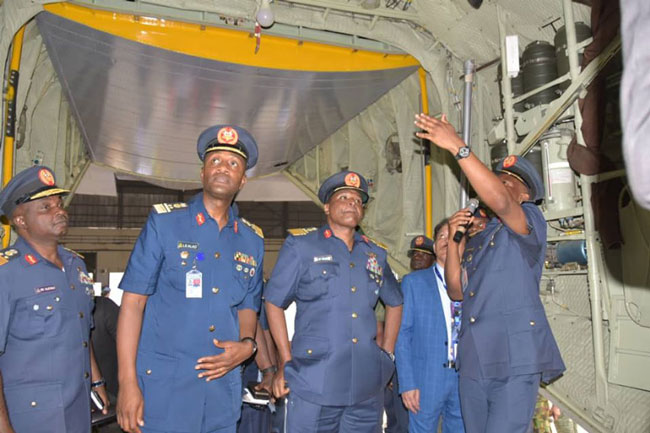 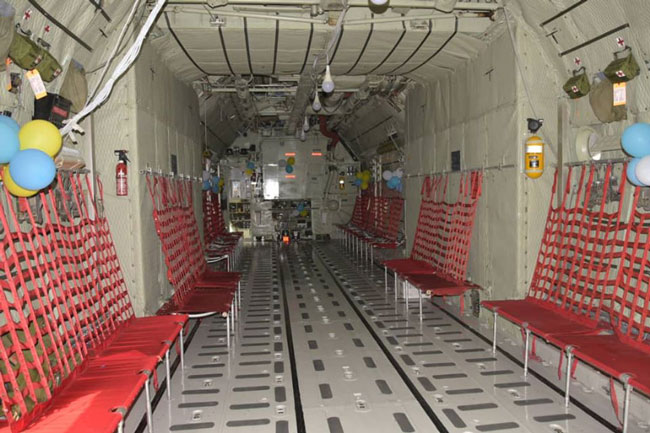 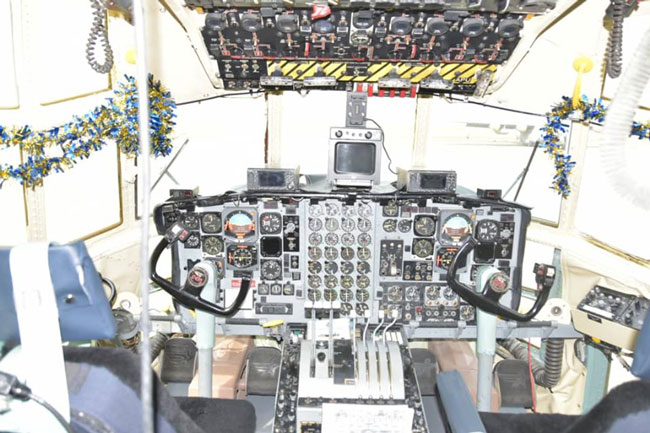 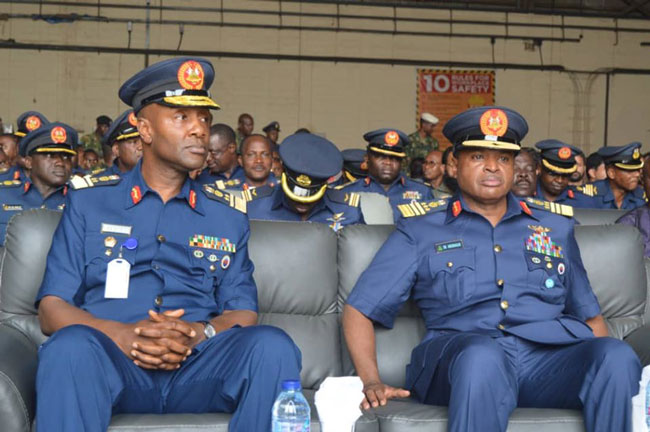 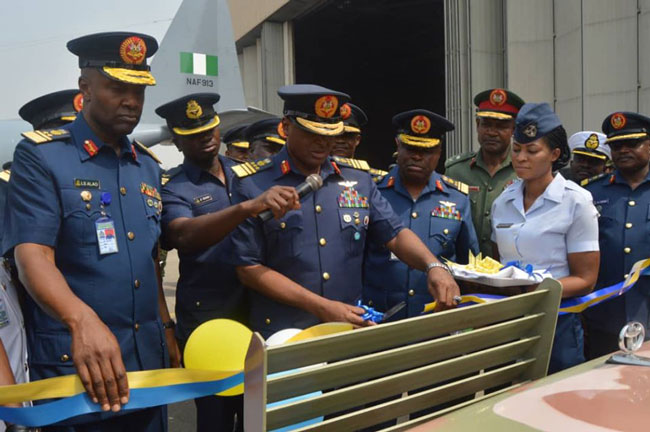 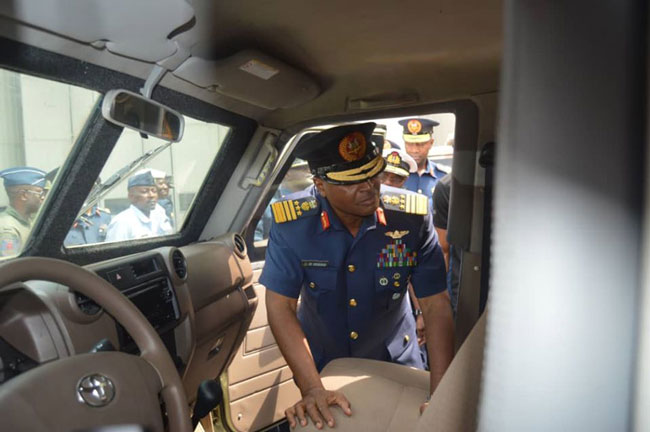 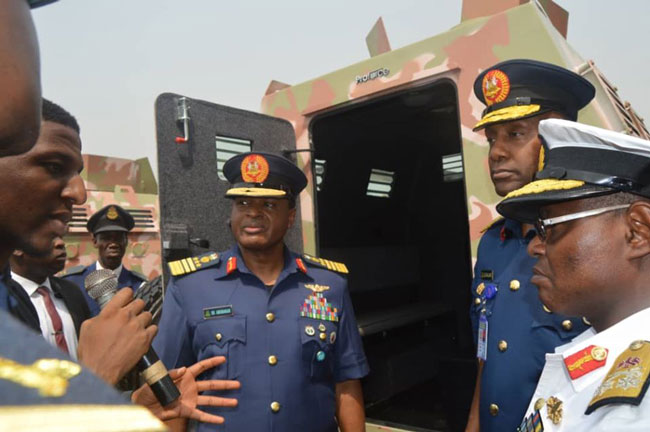 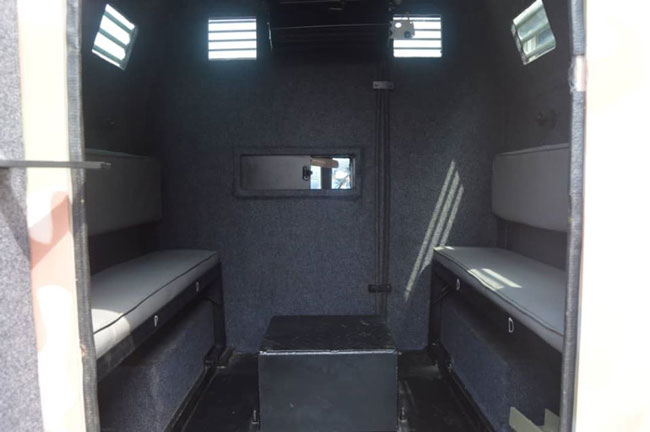 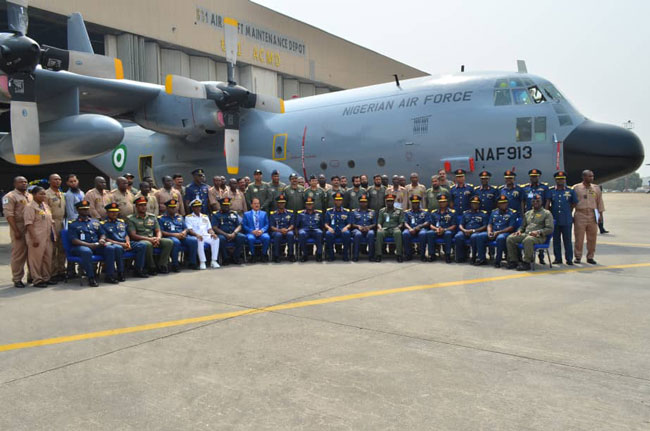 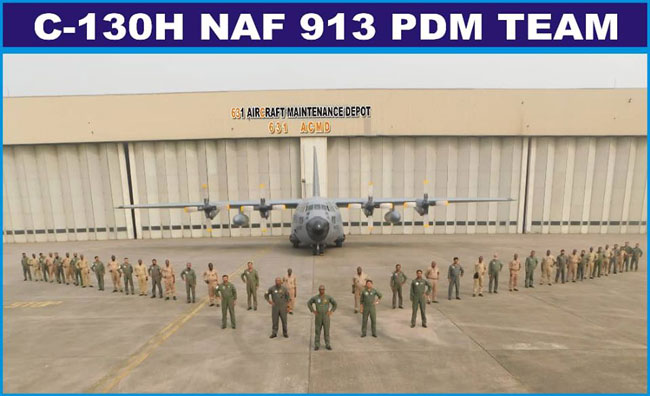 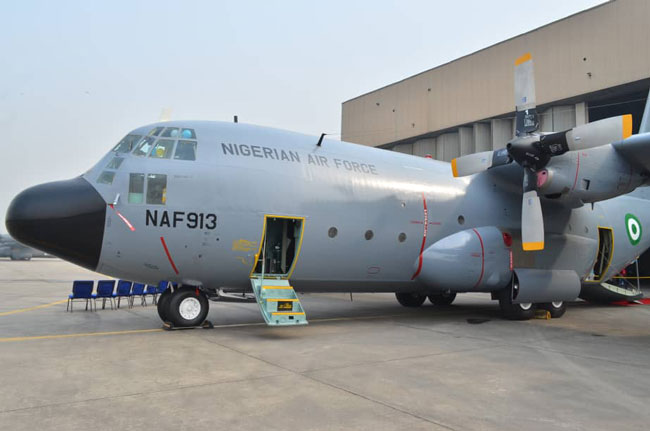