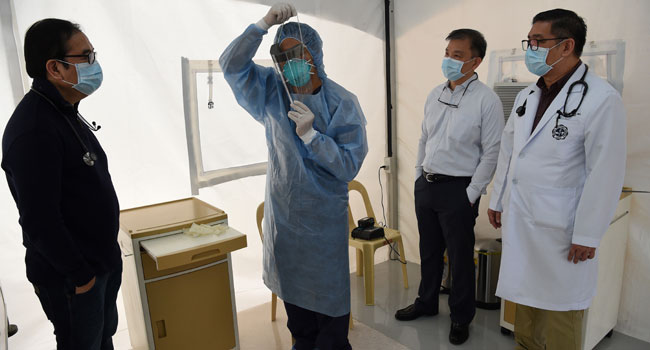 The Philippines has reported the first death outside China in the virus epidemic that has killed more than 300 people and spread to 24 nations.

The 44-year-old Chinese man who died in the Philippines was from Wuhan, the city that has been ground-zero for the epidemic.

Here is what we know — and don’t know — about him:

The man and a 38-year-old Chinese woman also from Wuhan, who authorities called his companion, flew from Hong Kong to the Philippines on January 21.

Health department authorities said the pair travelled to the central island of Cebu and then the city of Dumaguete, which is on a neighbouring island.

Cebu Pacific airline said it was working with health authorities to track down passengers from the two flights they took.

Days after arriving in the Philippines the pair went to see a doctor with symptoms like cough and fever.

They were both admitted to hospital from January 25, she with a “mild cough” and he with pneumonia, the national health department said.

In recent days the man was stable and even showed signs of improvement, but his condition rapidly declined over his final 24 hours and he died Saturday in Manila.

Authorities did not say if he had pre-existing health problems, which has been the case for many of those the virus has killed in China.

The woman is recovering in hospital.

However, they did not offer any specific information about the man.

On Sunday the World Health Organization said the deceased man was not “a locally acquired case” of infection.

How Authorities Are Responding

Less than an hour before the death was announced, the Philippine government announced it was barring arrivals of foreigners travelling from mainland China as well as Hong Kong and Macau.

The deceased man and the woman arrived on January 21, before some nations began to close their borders and tighten restrictions on Chinese arrivals.

At that time, Chinese authorities had reported just over 300 cases and six deaths — the toll was on Sunday more than 300 deaths and some 14,500 confirmed infections.

WHO Calls For US, China To Unite To Fight COVID-19