The police have arraigned five suspects arrested in connection with the failed robbery attack on a commercial bank in Abuja.

The suspects were arraigned on Friday at the Federal Capital Territory (FCT) High Court, seven weeks after they were said to have committed the crime.

They were charged with five counts bordering on conspiracy to commit armed robbery, robbery and illicit possession of firearms.

When the charges were read to them, all the suspects pleaded not guilty.

Upon taking their plea, the lead prosecution counsel, James Idachaba, made an oral application for the court to give both parties a week for the commencement of the trial.

He informed the court that the police were ready to present seven witnesses to testify in the case.

On his part, David Ochimana, who is the counsel to the first defendant and the alleged mastermind of the robbery, Larry Ehizo, aligned himself with the application of the prosecution counsel.

The suspects were said to have attacked the bank located at Mpape, a satellite town in the nation’s capital on December 28, 2010.

They reportedly gained entry into the banking hall after shooting sporadically into the air to scare people away.

In what looked like a scene out of a movie, scores of residents converged on the area to watch what they had seen on the screen in reality.

Unfortunately for the suspects, the hope of successful and well-planned operation was dashed as they came to the end of their road after they were trapped inside the bank. 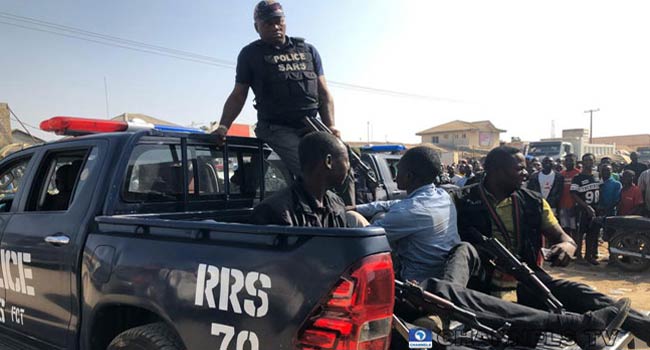 This was as a result of the prompt response by security operatives made up of men of the Nigeria Police Forces, Nigerian Army, and the Department of State Services (DSS).

The security team arrived shortly after the suspects began the operation and positioned themselves strategically in the area to prevent the assailants from escaping.

The suspects eventually met their waterloo during an exchange of gunfire with the security personnel, resulting in the death of one of them while four others were arrested.