Security Beefed Up In Kaduna For El-Zakzaky’s Trial 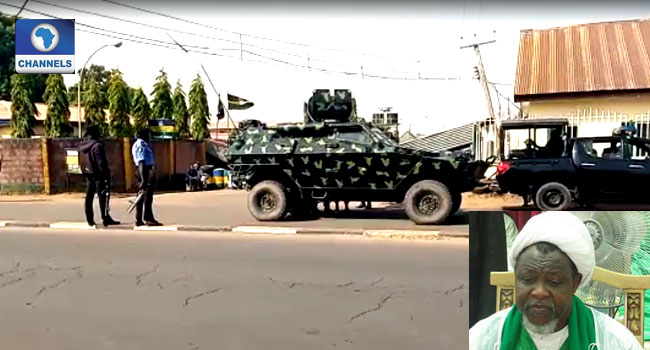 Security officers on Thursday beefed operations in the Kaduna State capital following the resumed trial of the embattled leader of the Islamic Movement of Nigeria (IMN), Sheikh Ibrahim El Zakzaky and his wife, Zeenat at the state high court.

All major roads leading to the Kaduna State High Court Complex have been cordoned off by security operatives.

Security is also beefed up at the court premises, to avert to the breakdown of law and order, especially with the violent protests by IMN members.

El-Zakzaky and his wife are facing an eight-count by the Kaduna State government over allegations of culpable homicide, unlawful assembly, and disruption of the public peace, among others.

During the last court sitting on December 5, 2019, the presiding judge, Justice Gideon Kurada ordered the Department of State Security Service (DSS) to transfer the IMN leader and his wife to the detention facility of the Nigerian Correctional Service (NCS) in Kaduna State, in order to allow their lawyers have easy access to them.

Justice Kurada’s order was a sequel to the application filed by counsel to the IMN leader, Haruna Magashi at the resumed hearing of the main suit, eight months after the last adjourned date on March 26th, 2019.